The next country on our travels was Vietnam! Of all the places we had planned to go Vietnam was the place we were most uncertain about. We knew that we definitely wanted to visit and it was the country that I had been most excited to explore. However, we had heard really mixed reviews from our friends and travellers who had been before, lots of people had loved it but others hadn’t enjoyed their time in Vietnam and one friend disliked it so much that they ended their trip early.  Nevertheless, Shaun and I decided we would go and see for ourselves so we decided to go with our 2 week visa, see a little bit of Vietnam and then head on our way to the next destination.  (SPOILER – we absolutely loved it and ended up staying for a month, read on to see why!)

We decided to travel North to South, which seemed like the least popular route to take, with most people travelling South to North. So, our first stop in Vietnam was the city of Hanoi. I think we had a baptism of fire visiting the capital city first, stepping off the plane we were hit with a brick wall of heat, I had never experienced humidity like it before and it only got worse when we reached the middle of the city. I would like to say I got used to the heat, but I didn’t! I still ended up getting  hot and sticky the instant I walked outside.

Also, the traffic is INSANE! bearing in mind, I live in London, have spent 4 weeks working in Manhattan and recently just visited Bangkok, so I think I’ve had decent exposure to busy cities. Hanoi was crazy, there are literally no rules to the road, no proper lanes,  traffic lights are treated as optional and it seems the only way to be safe on the road is to listen out for the incessant honking from cars and bikes, which seems to be the universal language for ‘I’m coming, move out the way’.  Crossing the road became an Olympic event, but eventually we figured it out and the key to crossing safely in Vietnam is to ‘walk into on coming traffic, the traffic will drive around you’.

The first place Shaun and I visited in Hanoi was the Vietnamese women’s museum, which displayed the role of women in Vietnamese culture and society. Gender and gender relations are topics that I am really interested in so I was particularly excited to visit this place.  The museum has three permanent displays. ‘Women in Family’ which depicts the role of women in Vietnamese families and motherhood, we learned that it is often the women in rural areas who will travel into the cities to work and earn money for their families while the men stay and look after the animals and land, which is obviously quite different to western cultures so it was interesting to learn about. The second display focuses on ‘Women in history’, this display was particularly interesting as I think often, the contribution of women is overlooked throughout history, so to have a display dedicated specifically to women’s contributions was great! This display did focus heavily on the contribution of women in the Vietnam war, which makes sense considering that this is a pivotal part of Vietnam’s history. It was slightly jarring to read how the women were commended for their bravery by listing exactly how many Americans each had killed. However, this is interesting in itself to consider how history is told and retold in certain countries on certain sides of the war. The final permanent exhibition was on Women’s fashion, this exhibition is quite self explanatory and actually offered a welcome visual relief from all of the reading required for the previous two displays.  In all, I really enjoyed the museum and would really recommend to anyone who wants to learn more about the culture and history of Vietnam. 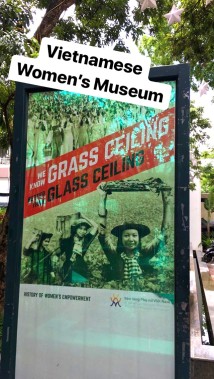 Another museum of sorts which Shaun and I visited and really enjoyed was Hao Lo Prison Museum, or also known as Hanoi Hilton, nicknamed by the US prisoners of war who were kept there during the Vietnam war. The prison itself was really interesting, built by the French in 1896 you can clearly see their influence in the architecture of the building. The prison was used first by French colonists to hold Vietnamese prisoners and then many years later by the Vietnamese to hold American prisoners.  In all honesty, Shaun and I didn’t know much at all about the war before travelling to Vietnam and we really wanted to try and get a better understanding of this whilst we were in the country. So, this seemed like a good place to start and we really enjoyed learning about the history of the prison, although ‘enjoyed’ sounds like quite an odd word to use to describe somewhere like a prison. Nevertheless, it was really informative and Shaun and I found it particularly interesting how the discourse around the treatment of prisoners changed when the prisoners were Vietnamese versus when the prisoners were American, and essentially how much better they were treated (hens the name Hanoi Hilton). Whilst, I’m sure this is based in facts, it is still interesting to think about this and consider how every country always has it’s own version of historical events as we were made aware in the Women’s Museum. 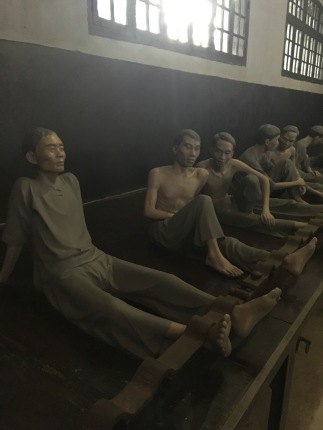 Shaun and I visited Hoan Kiem Lake on our first evening in Hanoi. We had planned to take a quiet walk around the lake and try to get out bearings of the city. However, we hadn’t prepared ourselves for the carnival atmosphere surrounding the lake. The nearby roads were closed off, so there were no cars or bikes driving around. Instead,  it was bustling with people, there were groups doing evening dance classes, street performers, groups of people having drinks and dancing, we even got approached by two school kids to have a conversation with them so they could practice some English. That was actually one of my favourite things about travelling, the occasions where we hadn’t even planned it but we had somehow managed to stumble across something amazing. We later realised after some googling, that Fridays to Sunday after 7pm is the best time to visit the lake because of this! The lake also looks really cool in the evenings as it’s lit up in various colours which highlights the different features such as the temple and bridges. However, Shaun and I also visited in the day and whilst it’s extremely lively and fun in the evening, It’s a really quiet and relaxing place to sit in the shade and have an ice cream in the day, and there’s plenty of cafés and restaurants surrounding the lake to get a refreshment. 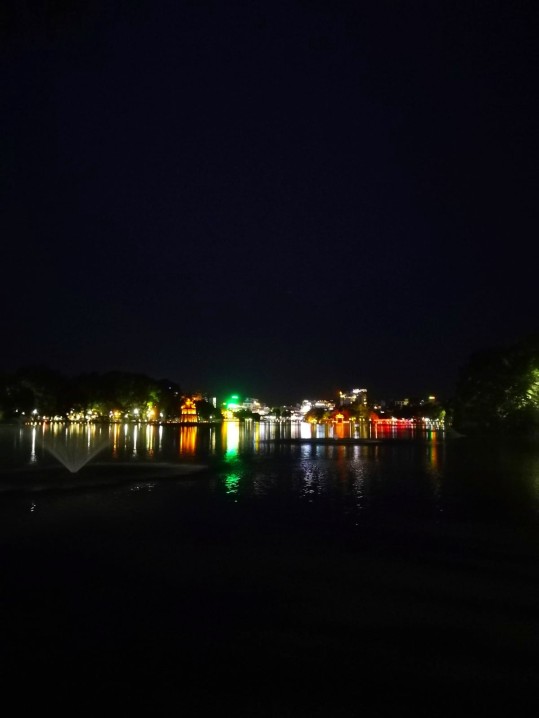 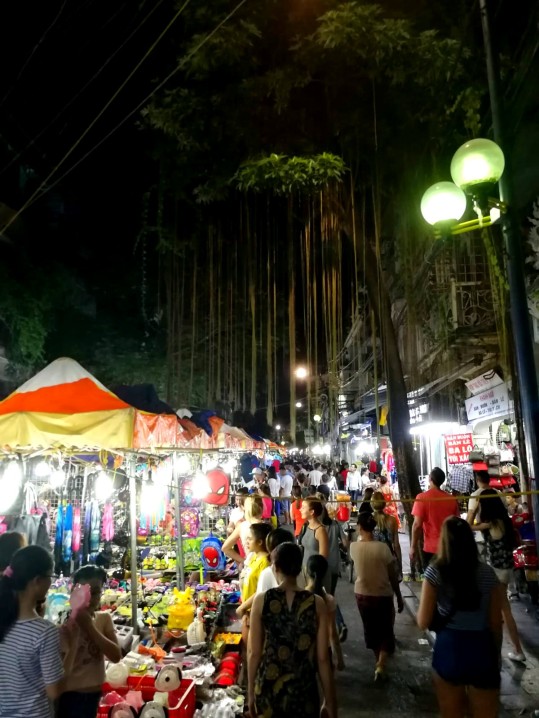 Shaun and I also had some really great food in Hanoi, I guess this is to be expected given that it’s the capital city. Much like Thailand I was nervous about trying a new cuisine, but Hanoi had a lot to offer and there was plenty of choice. A favourite place of mine was Pho ong hung. This is a chain with a lot of different stores across Vietnam. So, not an authentic little family run restaurant which I know lots of people seek when they go travelling, which Shaun and I were also seeking! However, I think sometimes there is a bit of snobbery when it comes to chains and actually I think both can be enjoyed. This place was perfect for one of our first meals in Vietnam, as people who had never eaten Vietnamese food, this felt like a really nice gateway into the cuisine and it was really delicious! The restaurant Shaun and I went to was on the corner of Hoan Kiem Lake.

Now we had cracked Pho, we were ready for another Vietnamese staple, Banh Mi. The easiest way to describe Banh Mi, is a Vietnamese sandwich, but it’s more like a baguette. Shaun and I visited Banh Mi 25, which was so good we went there twice! The menu is pretty small but this means you get really quick service, you can either take your Banh Mi to go, or sit in the seating area across the street. The owners are really friendly and welcoming! Finally, one of the other highlights of our time in Hanoi was visiting Giang Cafe, where we had ‘egg coffee’. There was no way I could write about food and drink in Hanoi and not talk about this place, especially as a self confessed coffee addict. I didn’t actually know about  ‘egg coffee’ before travelling to Vietnam, but the first cup of egg coffee came to be because of a shortage of fresh milk in Vietnam during the French war. Tri oa Nguyen and his family have a café in Hanoi where you can try it for yourself,  this place is really amazing and authentic, it’s tucked in a little side alley which really adds to the atmosphere, you can read more about Tri Oa Nguyen and his family here. 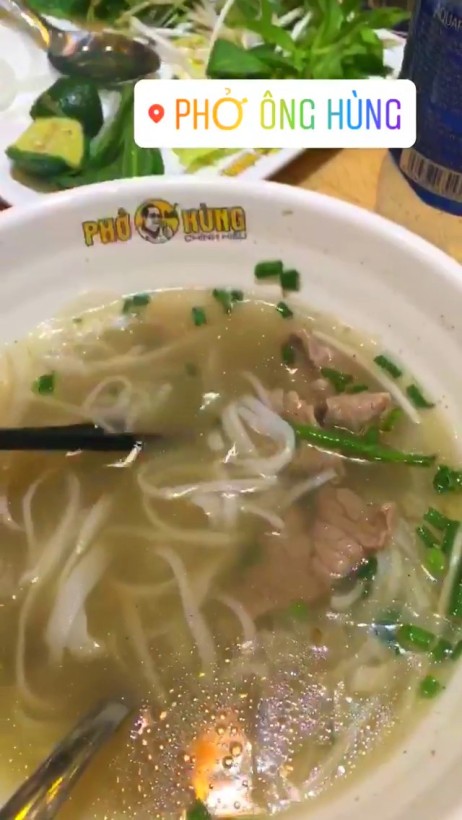 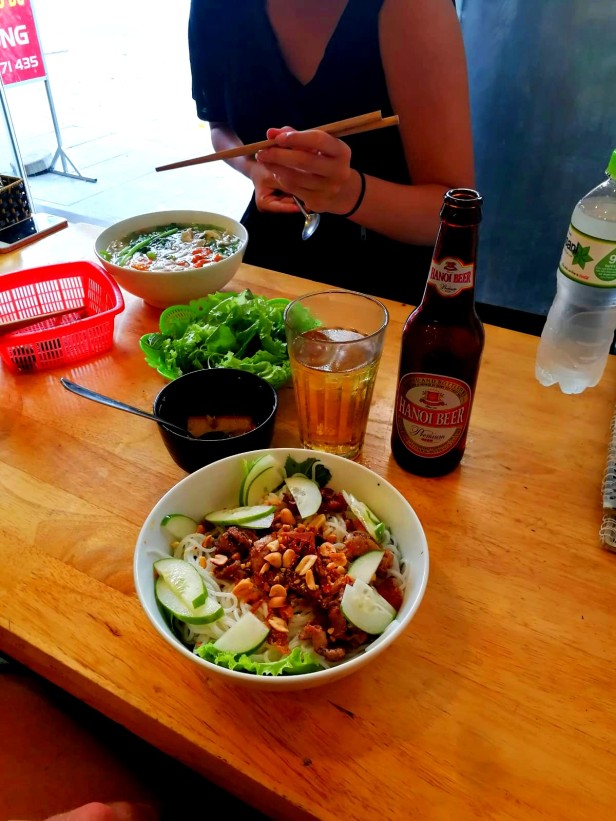 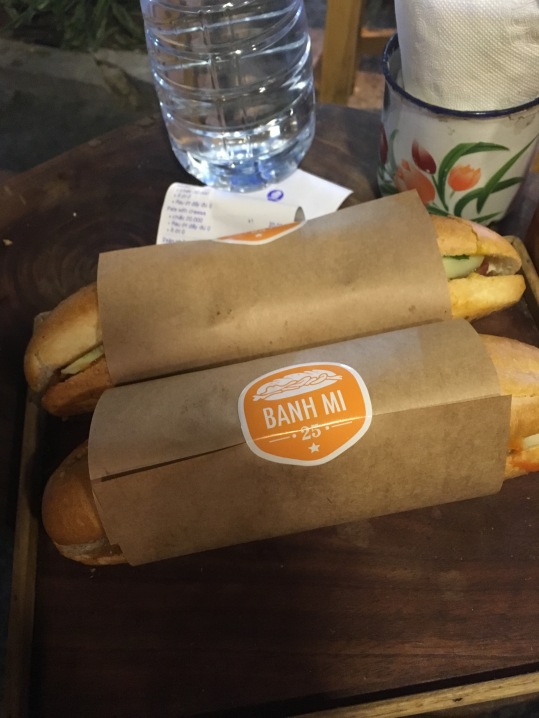 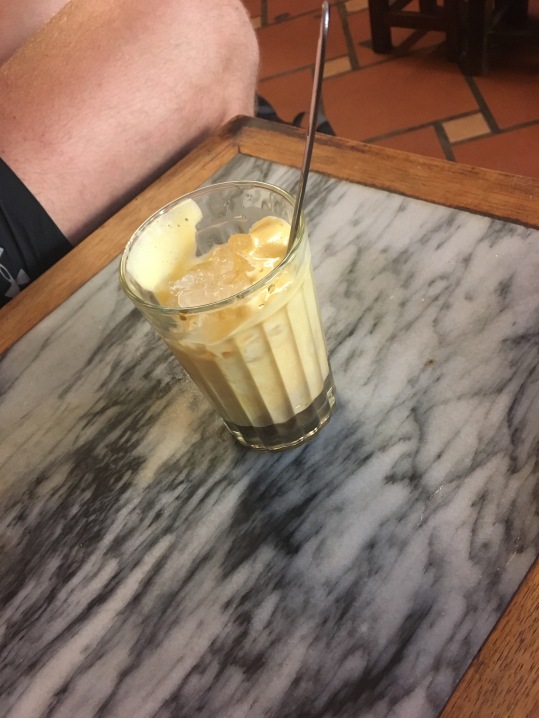 Hanoi was sweaty, uncomfortable and crazily hectic, but amongst all of that, it was an amazing city with tons of culture and Shaun and I loved it. I think it was after only a couple of days here we realised our 2 week visa wasn’t really going to be long enough. 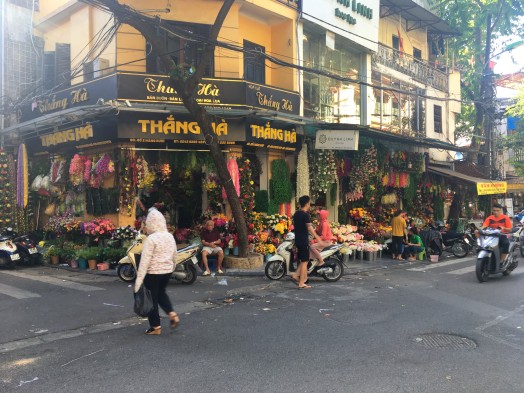