After our time in Hanoi, we ventured up north to visit Halong Bay. Unsurprisingly one of the most popular destinations to visit in Vietnam, as a UNESCO world heritage site, Halong bay is a thing of beauty.

Shaun was really excited to go to Halong bay. However, we both had our reservations about going. Mainly due to the fact that we knew how popular it had now become, we were worried if we would actually be able to take in the beauty or if we would just be stood in a line behind another 100 tourists trying to capture that ‘insta-worthy’ picture.

After, much back and forth about which cruise operator to go with and how long we should visit. We decided to go for one of the more premium boats and go for one night as opposed to two. There is an overwhelming amount of options for operators, some specialising in party boats and ranging from very basic packages to more premium services.  We felt that if we were going, we wanted to stay somewhere comfortable and also guarantee that we had some good food, but we were also on a travellers budget so couldn’t afford to splash out too much.

Similarly, operators offer varying lengths of trip duration ranging from 1 to 3 nights. We felt that one night was long enough to experience Halong bay, see the sights and explore but not too long if it did turn out to be disappointing.

We travelled to Halong bay via bus from Hanoi, once we arrived at the bay we were greeted by our crew and welcomed onto the boat with tea and cold towels, which was a really nice touch. After some tea we  were able to check into our rooms and relax for a while, all whilst sailing further into the bay. 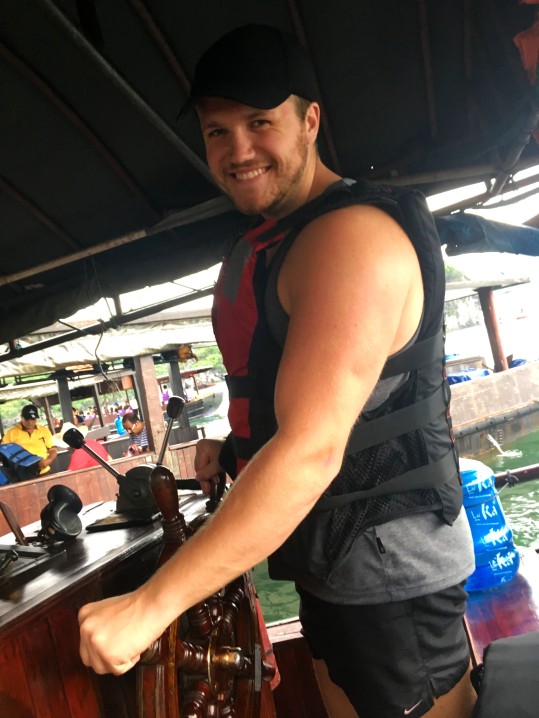 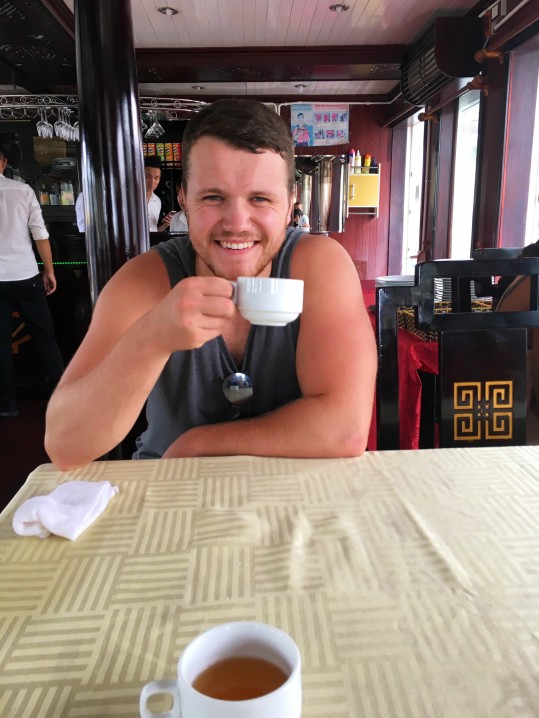 Once we had freshened up we were taken to ‘Surprise cave’,   a simple name, but a fitting one. A very small and narrow pathway leads into a small and unassuming cave. However, if you keep walking along the path you end up discovering a much larger spectacular cave, which is well, a surprise! All the different areas of the cave had been dramatically lit up by lighting along the walkways. Shaun and I could not capture how amazing it looked on camera, it reminded me of a scene from harry potter, where they pan around some of the landscapes in Hogwarts.

We also visited Tip Top island, named after a Russian astronaut Gherman Stepanovich Titov. There was a view point which you could walk up to if you were happy to climb 425 steps! Once you were at the top it offered an amazing  view of the bay where you could see all of the boats parked up and it really offered best perspective of Halong bay. There is also a small strip of beach below where you can sunbathe and swim for anyone who doesn’t fancy exhausting themselves climbing to the viewpoint. 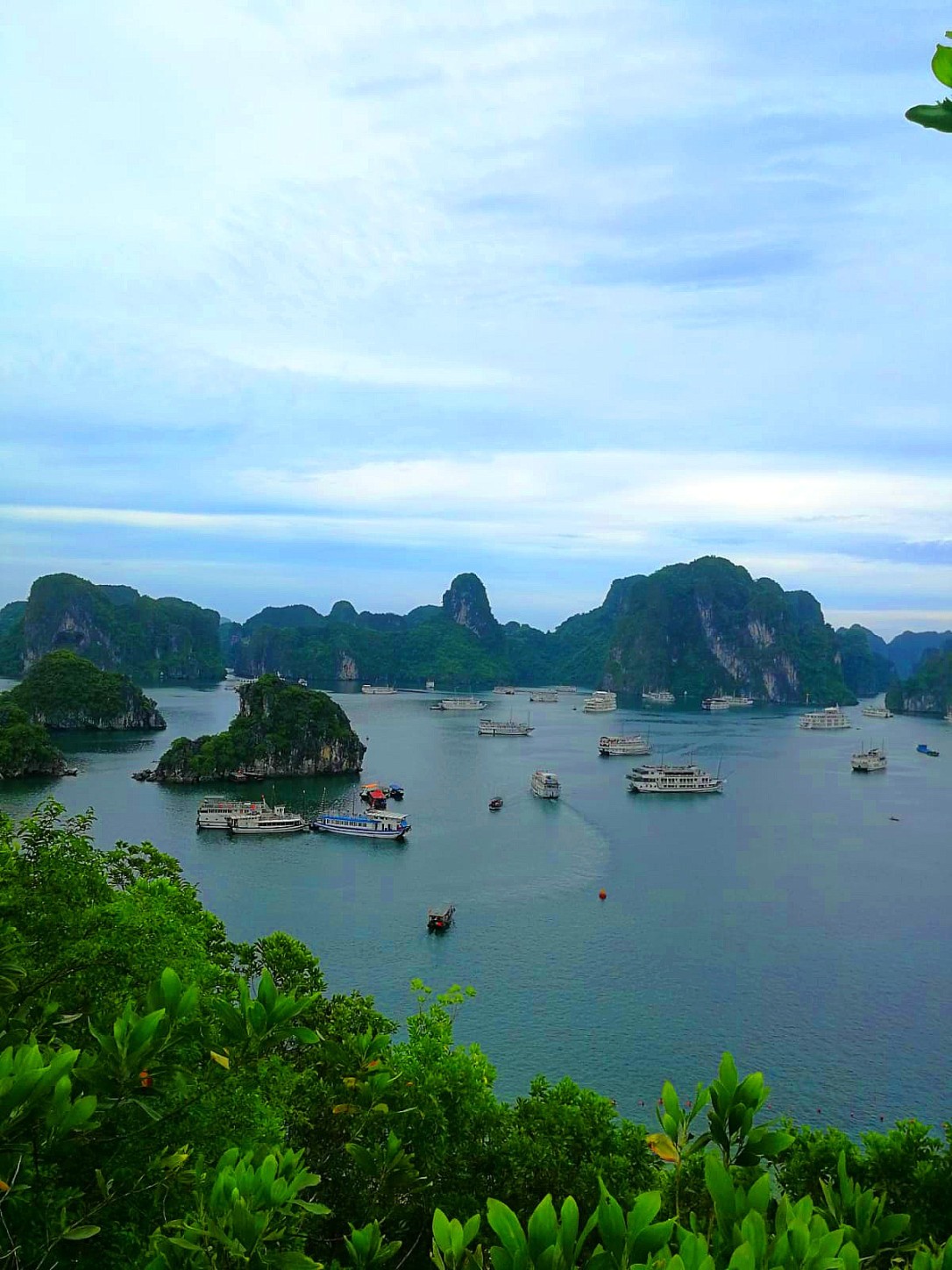 Back on the boat we showered and got ready for dinner, we  had drinks on the sundeck of the boat and watched the sunset with music which was really nice and peaceful. We had dinner which was around 5-6 courses, but was served in a family dining way where they placed big bowls of food in the centre of the table for people to help themselves to what they wanted, this was a great way for us to try different foods without feeling guilty for wasting anything and it was exactly what Shaun and I were hoping for, for the kind of cruise we had booked on to. After dinner we went squid fishing off the side of the boat. Yours truly was the only person to catch a squid. However, as soon as I reeled it in I panicked and started crying and demanded it be put back in the sea! 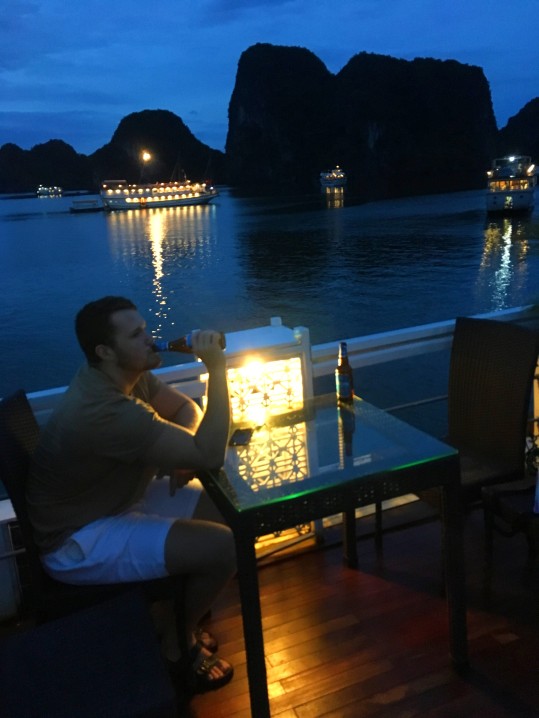 Our second day on the boat started with another early wake up call for breakfast, we then went kayaking around Halong bay. I was really excited about this, however the reality of it was me screaming at Shaun who would not stop fidgeting in the back of the kayak causing it to rock back and forth and make me feel like it was going to flip us over.  Once I had relaxed into the kayaking  (and Shaun had stopped moving about!) I was able to take in the scenery which was beautiful.

Prior to our trip to Vietnam, Halong Bay was one of the few places we already knew quite a lot about or had seen loads of pictures of, so it was something that we really wanted to go and experience for ourselves and we did really enjoy ourselves. However, the reality of it didn’t quite live up to the magic of the photos we had seen because it was so busy and so touristy, we also visited in monsoon season so we didn’t always have the beautiful blue skies we are used to seeing in photos of Halong bay.

One of our favourite things about Vietnam was that it felt much less touristy than when we had been in Thailand, but Halong bay was the exception to this rule! As we had a month in Vietnam we were happy to take a couple days to come and see it and we really enjoyed because we came with realistic expectations, but if we had been on a shorter trip with less time then there is definitely places I would prioritise over this. 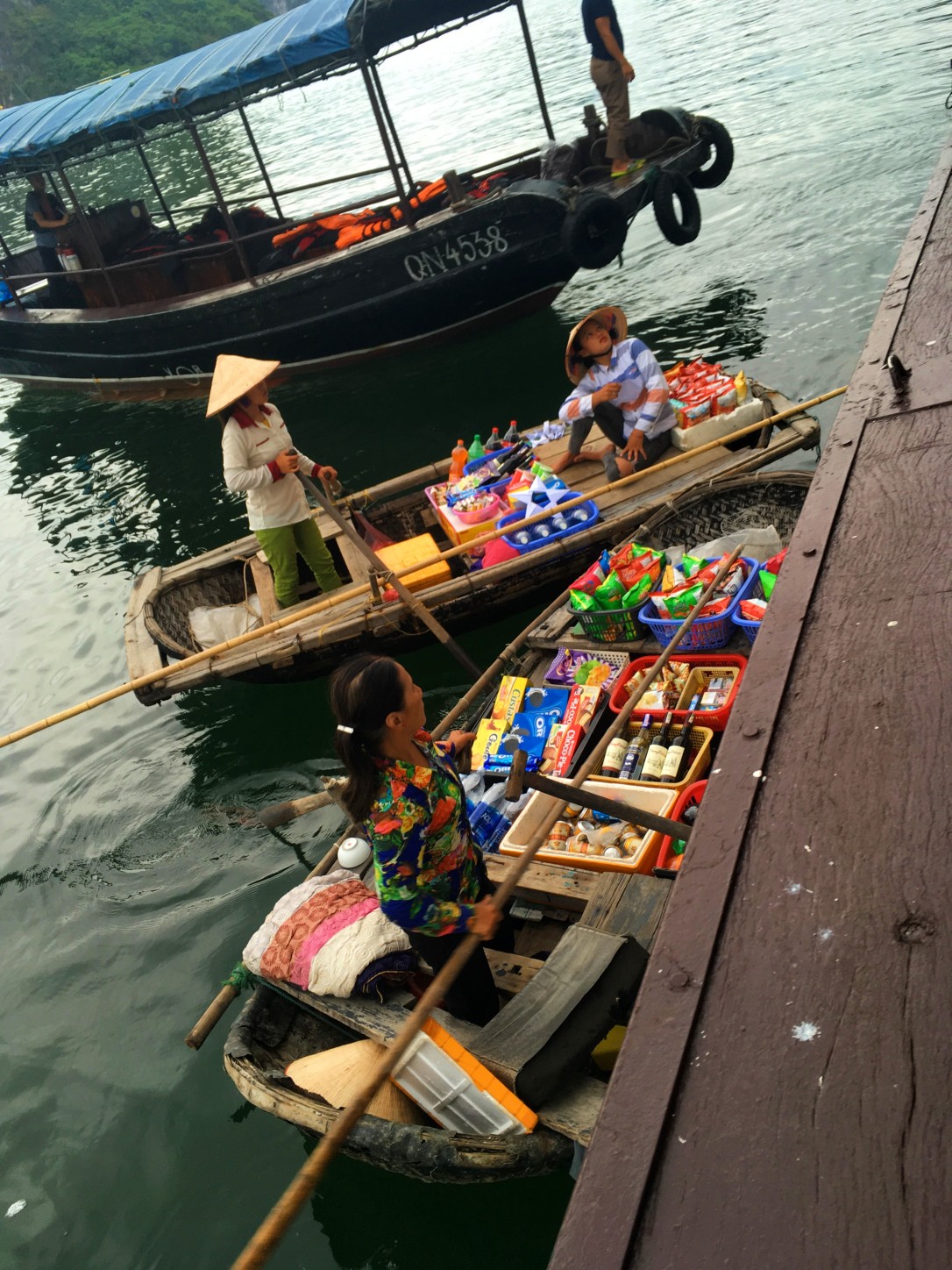